Emissions – the ‘business as usual’ story is misleading 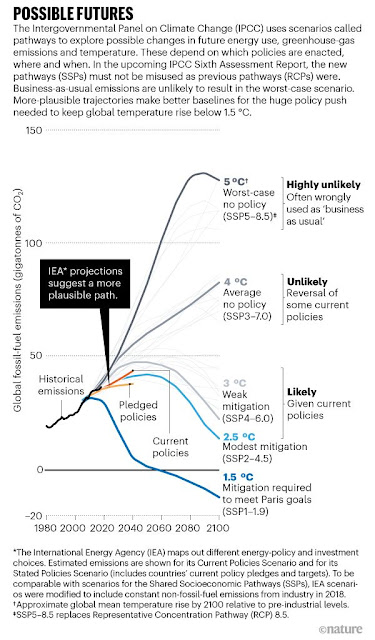 Nature
Stop using the worst-case scenario for climate warming as the most likely outcome — more-realistic baselines make for better policy.

More than a decade ago, climate scientists and energy modellers made a choice about how to describe the effects of emissions on Earth’s future climate. That choice has had unintended consequences which today are hotly debated. With the Sixth Assessment Report (AR6) from the Intergovernmental Panel on Climate Change (IPCC) moving into its final stages in 2020, there is now a rare opportunity to reboot.

In the lead-up to the 2014 IPCC Fifth Assessment Report (AR5), researchers developed four scenarios for what might happen to greenhouse-gas emissions and climate warming by 2100. They gave these scenarios a catchy title: Representative Concentration Pathways (RCPs)1. One describes a world in which global warming is kept well below 2 °C relative to pre-industrial temperatures (as nations later pledged to do under the Paris climate agreement in 2015); it is called RCP2.6. Another paints a dystopian future that is fossil-fuel intensive and excludes any climate mitigation policies, leading to nearly 5 °C of warming by the end of the century2,3. That one is named RCP8.5.

Economist - Forecasting the US elections

Which states will Donald Trump win come November? Which ones are likely to turn blue? Our new statistical model is free to read https://t....